?
ETA: updated 12:30 EST to reflect comments from two posters which made a very good point; I missed a risk.

So, a set of boxes have appeared below the reply box that say "Repost to" Facebook or Twitter. I'm seeing a lot of concern about it on LJ, and have done some experimentation to see how warranted the concern is. The answer, so far, is "probably not too much" as long as

2. You don't post sensitive, identifiable things in public posts on your LJ, and

3. Your friends don't repost comments which themselves include sensitive material (this last is likely the biggest risk)

I don't have a lot of time to do a deep dive on this, but here's what I believe at present:

If you touch nothing, your entries and comments will not go to FB/T. You cannot even click the boxes to do so. To repost your own LJ entries or comments to FB/T, you have to go into a special Settings page (click on "Settings" in that link) and tell LJ your FB/T accounts. That also allows you to tell LJ to by default post your entries or comments on FB or T. Remember, if you do not do this, LJ does not know who you are on FB or T. Even if you do it, you get to either set them to go by default, or decide each time whether to do it.

If commenters to your LJ use the FB/T option, the effect is the same as if they posted a link to your LJ on FB/T without saying who you were. Readers of your LJ get to make the same choice about their comments. So they can comment on your LJ and, if they have linked themselves to their own FB/T account and if they have told LJ to do it (either through checking a box or through defaults), then their comment on your LJ will indeed get posted. Here's an example of what that looks like on Twitter (I've got a Twitter account that doesn't link to my real name):

hue_tlatoani: Given the popularity of poker within the financial community, and the huge number of books and videos on how to detect… http://j.mp/a8Nzaz

That last bit is a link to their comment, which will take people who click it to the original poster's LJ - if they can access it. Note that it does not tell who the LJ owner is on Twitter/FB, though this could possibly (not tested) be a risk if they've linked their accounts.

As long as you have not linked your accounts, the only way this new option can directly raise the risk to your LJ is that it increases the chance that someone will post a link to your LJ on FB/T. People who click that link will be able to read the post in question if it's public, and will also now be aware of the existence of your LJ. They will not know whose LJ it is, but can poke around and read all public posts in an attempt to figure it out, just like they could without this new feature. If your LJ is not secure against that kind of attack today, and you are worried about it, you need to fix that.

However, if commenters repost comments to FB/T which include sensitive information, especially early in the comment, then you've got a problem. If someone's comment on your post includes sensitive information ("Your boss at Acme is embezzling money?!" "I agree, Bob is a real asshole") and they repost it, that comment will go straight to FB/T without regard to whether the post itself is friends-locked. This is somewhat mitigated on Twitter due to the fact that it only shows the first X characters, where X<120 or so (I wrote the examples above so they'd still be bad at that length). Don't know what it looks like on FB; someone whose LJ doesn't use their real name will have to play with that as I don't have time to create a dummy FB account to test it.

I will update if I learn more. If you play with it and learn something different, please let me know.
This, apparently, is what happens when you subject an iPhone to 9Gs in an F-16 during a dogfight: 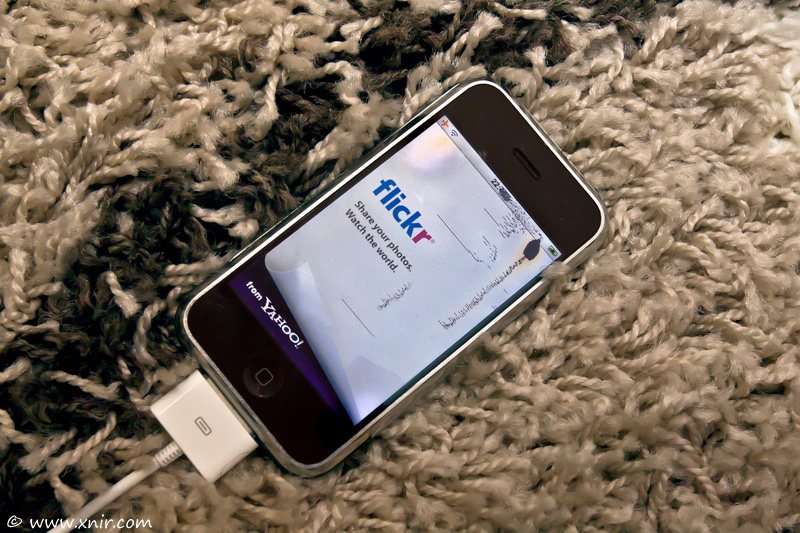 I find the fact that it's in Airplane mode way more amusing than I should. (For non-iPhone users, that's what the little orange icon in the top left corner means. It shuts the phone functionality off. And it should also kill the wireless, but that seems to be on. Hmm.)

Original link. Some interesting discussion there.

...in small towns, run by corrupt justices with no legal training and little oversight, who do things like:

* let their friends walk free when they get busted for something

* make indigent defendants do labor around the courthouse to pay for their public defenders (for those who don't know, this is a violation of the Constitutional right to counsel; it's very basic)

* jail people without trial for months if they feel like it

* make racist remarks from the bench

Real Dukes of Hazzard stuff. Must be the South, right?

...and here's a followup from last month, explaining that while some reforms have happened, the problems are basically unchanged:

A wager on whether people will be dumb enough to follow this? Inbreeding among Saudi families? You got me.

Get your own valentinr
...you wouldn't know enough to reinvent technology? Well, I did, and apparently I'm not alone, because these guys did something about it:

It also comes on a t-shirt, so if you're concerned that you might get plucked from 2010 randomly and stuck in Tudor England, you can wear it under your clothes all the time just in case.

Not that I would do that. I'd keep a scaled down printout in my pocket, or something. Right next to the Krugerrands and penicillin. You know, if I were worried about something like that.

THE KNAVE
Faith, it awaits down there someplace; prithee let me glimpse again.

WOO
What, thou rash egg! Thus will we drown thine exclamations.

[They again insert his head into the commode]

The Big Lebowski, done in the style of MarloweShakespeare.
I agree with this article: a mortgage is a business transaction, and homeowners are being suckered into thinking that walking away from an underwater mortgage carries ethical implications when it doesn't. Whatever bank the mortgage is with walks away from bad financial deals all the time. And the argument about "walking away from their responsibilities" is crap. They aren't. They're suffering exactly the consequences the bank specified in the contract for walking away: forfeiture of the house.

The bank wrote that contract, after all, and the bank was definitely the party with more power, so they're getting exactly what they insisted on. Go ahead and give it to them:

While there are certainly financial and credit consequences to walking away, it pisses me off that people are taking the position that this is in any sense a moral issue. It's simply a business contract, and when you break a contract, you suffer the specified consequences.

ETA: As I mention above, there are consequences to walking away. And you'd better know them before you decide. So yes, talk to a specialist real estate lawyer to make sure you know precisely what they are. Don't assume you know the rules; in some cases, the bank may be able to go after your other assets, not just the house. But while losing everything you own might be one of the consequences, being a bad person isn't.
Collapse